Mike retired but not quite! - The boatyard Gofor!

Michael, the 4th generation in this long established business (since 1902) has recently almost retired!  Michael grew up on Topsham Quay, living in the Port House, back to back with the Lighter Inn.  Michael started work in December 1957 just after his 15th birthday.  With a grant from the Topsham Market Trust he brought a set to tools in Ottens, Fore Street, Exeter, an Aladdin’s cave of equipment!

The first job he was given was to replace damaged planking in a dinghy under the watchful eye of his Grandfather William, who used a long piece of batten to poke him to point out when he had gone wrong!  The workshop was in what is now the Lighter Inn bar, then part of the Port House that went with the job of Quay Master and where the Quay Master had to earn his living.  The Trout’s took in any repairs in wood on yachts, cruisers and the ships that tied up to Topsham Quay to deliver cargoes of potatoes, timber, slate and cement.  The hours were as today, plus assisting with mooring lines as ships came and left from the Quay for a wage of £5.00 a week.  Alongside the repairs they also built 8ft dinghies to 24ft small day boats.  The limitations to the size of boat were the height of the ceiling, the width of the pillars in the middle of the workshop/now bar and Michael’s ability to slide over the top of the boat under the ceiling to work on the inside of the hull!

Once the boat was nearly finished it would be pulled part way out of the workshop for completion.

In 1959 Tuborg Larger started to deliver their Larger to Topsham Quay from Copenhagen on the C Herup for distribution from what is now the Quay Centre.  Michael was invited to sign on as crew for his summer holidays and over the next few years made about 9 or 10 trips for £5.00 a week plus his keep.  Pictured is the C Herup tied up to Topsham Quay.

In addition to Copenhagen he visited Marstal on the Island of Aero, the home port of the ship, ports in Russia, Finland, Sweden, Norway, Amsterdam, Rotterdam and the Channel Islands.

In 1963 Lynn fell in the mud at his knees, clad in white jeans!  Once engaged Lynn went on to learn the basics of boat building watching and working on the next boat keel upwards.  An invaluable experience when it came to understanding the invoice descriptions!  Michael and Lynn married in 1965. 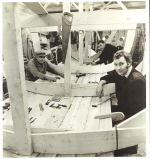 During the 1970’s fibre glass became the new material to work in and Trout’s designed and built a fleets of 29 Exe 17’s and many little Raleigh dinghies. All went well until the Government applied 25% Vat to Boats and Caravans!  The business survived and the Government saw sense and brought the Vat back to 17.5%.  For the next 10 years or so, Trout’s worked on repairs, restorations and fitting out other’s hulls, Tamars, Seafarers, Corvics and Mitchells.

In July 1986 Michael’s son, Mark completed a boatbuilding repair course in Falmouth and joined the firm. Pictured are Daniel, Mark & Michael in 1988.

Business has continued in wood and GRP, repairs, restorations, rebuilds, fitting out and improvements to which we added storage and pontoons over the late 1990’s/2000 and more Staff. 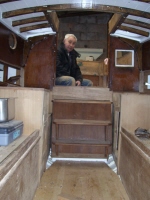 Michael continued working in wood and driving the crane mostly, alongside doing any other job that needed his attention. The last job was to restore Mayfly, a beautiful 20ft carvel, double ended sailing boat for Dr Scott. It took nearly a year and when Michael finished his contribution on 30th May he and Lynn left for a 4 week tour of Denmark, including Marstal on the Island of Aero and Sweden. Michael is pictured in the completed Mayfly

Now they are back, both are on call to the business and will be seen around the yard when Mark and his wife, Heidi, need the extra hands and holidays!  So nearly retired, but not quite!