Open for Business since 1902

Not many marine businesses can claim to have been 'in business' for a 120 years. This is the story of the company from 1902 to 2022, as related by Lynn Trout. It was on February 2nd 1902 that Daniel Charles Trout became Harbour Master at Topsham Quay near Exeter in Devon. 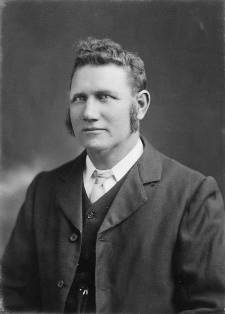 Daniel had worked in the Holman Shipyards in Topsham as a shipwright, but as Harbour Master Daniel had to give up his paid employment and make his own income. The post came with a five bedroom maisonette and a workshop in the Quay House, (back to back with the then much smaller Lighter Inn) but no wage.

Daniel became 'Daniel Trout', and began repairing boats, his headed paper having a ship on one side of the title and an adze crossed with a cross cut (two-handled saw) on the other.

The Harbour Master was responsible for berthing the ships at Topsham Quay and keeping records of the vessels, their tonnage, their captain and crew and a full record of the cargoes that came and went across Quay. He had to be available to meet the boats on the high tides and to meet the trains and let the trucks and flatbeds on to the quay to deposit and collect their cargoes from the boats. In those days the quay was protected by large wooden gates, which had to be locked over night.

The workshop was under the maisonette and in what is now the Lighter Inn bar. It was not a very big space and but it included a small office with an old fashioned desk in which to keep logbooks and a set of oak pigeon holes for correspondence from customers and ships, plus a heater for the winter. There were no doors to the workshop, just slatted gates. Daniel found work repairing and fitting out small trading schooners, barges and fishing boats.

The maisonette had a large living room with a big blackened range, a small kitchen and five bedrooms, which became four when a bathroom was put in. The floor between the workshop and the living room was planks over beams, covered in linoleum and old carpet. When the wind blew from the Southwest the flooring would rise and fall, lifting the furniture.

Sadly in May 1918, Daniel fell into the hold of a boat he was converting to carry coal and died from his injuries 24 hours later, so William Charles Trout , his son, had to take on the post of Harbour Master. 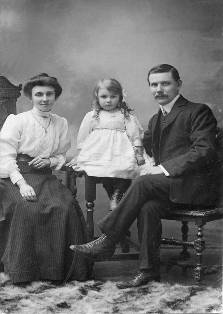 William allowed his mother and brothers to live on in the quay house until his mother died in 1926. William ran Topsham Quay on the same basis as his father before him, although he had trained as joiner. He used the workshop to repair boats, but also to build houses from;  William began to convert nearby waterfront  workshops and warehouses into private houses.   He also ran an undertaking business, building his own coffins. 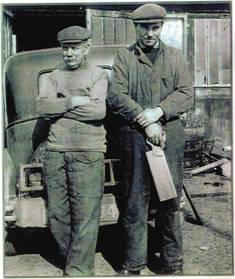 In 1927/28 Daniel James Trout joined his father in the business.  Daniel did not like the coffin making; he preferred the boat building and repairs.

Sometime around 1937 Trouts entered the leisure market, building half a dozen 'Snipe' Bermuda rig sailing boats, an American design by Crosby.  About a 15ft, carvel built hull with a hard chine, deal and oak, they weighed about 0.5ton dry and about 4ton wet!  They sold for £27.10 shillings, unless one had the pull up rudder, which cost a further 30 shillings!

At the start of the war Daniel and his Uncle Reg were sent to Plymouth to build Montague Whalers and personnel landing craft, but on July 19th 1941 they met with a road accident on the way back from Plymouth, which left Daniel in hospital for most of the rest of the war.

After the War, William renamed the business W C Trout & Son, and slowly built it up, building and maintaining small clinker and hard chine wooden boats of up to 25ft for the growing leisure industry, using the workshop beneath the maisonette.

In 1958 Daniel and his wife Nancy brought what is now the Ferry Road workshop (much to the disapproval of his father), and a few years later, the family built the quay alongside the workshop on top of old wrecks that were slowly disintegrating there.

William, Daniel, Michael and Eric, Michael's brother who worked in the family business for a period of about five years, and recently Mark have continued the boat building and repairs initially in the Quay House workshop, more recently using the Ferry Road workshop.

Together they have built many unique wooden clinker and carvel boats, usually motor sailors of 26-28ft, lofted on the workshop floor, among them - most notably - the Exe 20 in 1986 and, a replica of a Plymouth Hooker gaff rig cutter.

William died whilst he was still Harbour Master in 1960, and Daniel took the post, now called Quay Master and the maisonette.

By then the post provided the maisonette and workshop and a retainer of £5.00 a year!

Dan, Uncle Reg, Michael & Mr Wilkinson, (a Vet), the proud new owner of this clinker day boat with cabin, outside what is now the Lighter Inn bar, but what was the workshop 1960. 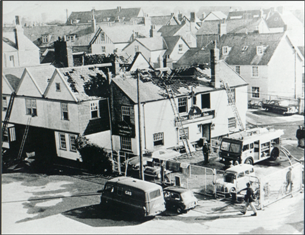 In May 1971 a fire started in the Lighter Inn in the early hours of the morning. Daniel and Nancy escaped with most of their possessions and the tools from the workshop.  When Exeter City Council rebuilt the Quay House they took the workshop into the Lighter Inn and made it the main bar, Daniel and Michael had to move all their boat building and repair work to the Ferry Road workshop.

Meanwhile, Daniel and Nancy moved back into the Quay House maisonette, but finding that they could not take the noise and smells from the Lighter Inn bar directly below, they had to move out.  With the help and advice of various Boat owners, they converted the upstairs part of the Ferry Road workshop into the flat which they lived in until their passing.

With the advent of GRP in the 1970s, the boat designs were adapted and reworked to fit the new material. Initially in the upstairs workshop at Ferry Road, where Trout's  produced 29 Exe 17s - a 17ft motor boat/work boat - over a period of four years, the production line for the craft only coming to an end when the Chancellor of the Exchequer introduced 25% VAT!

Another popular line was a little pram dinghy known as the 'Raleigh', more than 80 of which were produced.

Daniel and Michael have also fitted out Tamar, Seafarers and Corvick hulls to the meet owners' particular requirements, and have done a lot of restoration work on older yachts, both as insurance work and annual maintenance.

Daniel retired from the post of Quay Master in 1983 by which time he was being paid the princely sum of £75.00 per year. 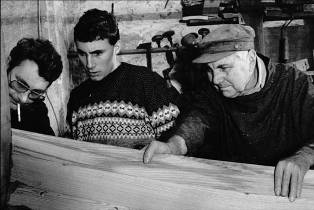 Daniel and Michael worked on as Partners and were joined by Michael's son in 1986 after he had taken a two-year 'ship and boat building' course at Falmouth.

Daniel retired from 'working' in 1991 but maintained a watchful eye on proceedings 'downstairs' from the flat.  At the age of 88, and on 31st December 2000 Daniel finally retired from the Partnership and Mark became a Partner with his father.

In the last 20 years the family have installed the pontoon facilities to widen the base of the business, culminating in some 45 berths.  During the Summer, the berths  are rented out for shallow draft boats such as RIBs and small power boats, whilst providing  mud winter storage berths for yachts.   The company also leases and maintains 29 swinging moorings on the river from Topsham Mooring Association.

In February 2022 - W Trout and Son is carrying out maintenance and repair to a full range of smaller boats and yachts alongside the marine engineering, the pontoons and moorings.   The company can also carry out osmosis treatments, and supplies and fits standing rigging up to 8mm.  The company is part of Topsham Quay Agents, who are responsible for winter storage on Topsham quay.

W Trout & Son is working on boats from along the south coast and up into the Midlands, plus local craft from Dartmouth, the South Hams, and of course the Exe estuary.  Trouts provide access to the Exe Estuary for ferryboats to Turf and visitor pontoons for yachts and motor cruisers from along the South Coast and across the Channel. 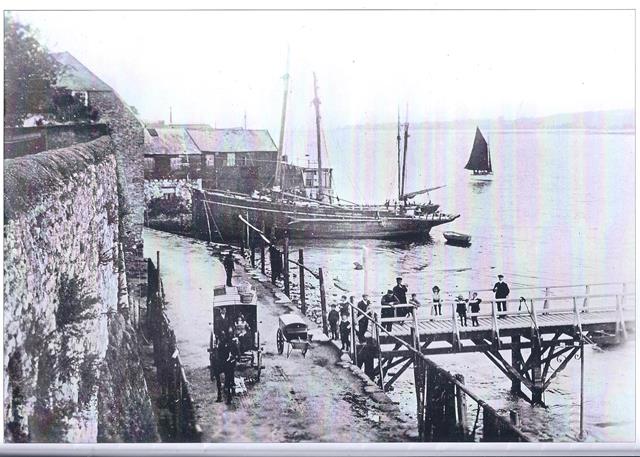 Copyright Past and Present Publications

Our current site on Ferry Road in about 1905.  Looks a busy place!  The wooden post and rail or Gallas, was for drying the fishing nets on.  The Victoria Pier built to celebrate Queen Victoria's Jubilee was demolished after a small boy fell through the rotten decking and drowned.

The original timber top floor was built over old stone stables.  The old stone walls are still there and form the bais of our current workshop.  The quay sheds were last used as a coal depot before Daniel brought it 1958.  He and Michael then knocked the remains of the rotting timber down and put up the current workshop.